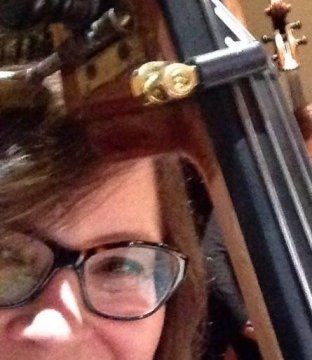 Sally started playing the bass in seventh grade, after she heard a recording of a Bach cello suite and fell in love with the cello's gorgeous sound. Wait… what - if the cello was so gorgeous, why does she play the bass?  Well, when Sally went down to the music classroom and asked to learn the cello, the music director took one look at her 5’9” frame and handed her a bass instead.  She didn’t notice his trick until a few weeks later, but had already fallen in love with the coolest instrument in the string section.

Sally was lucky enough to play in a terrific regional youth orchestra as well as in an award-winning high school orchestra, but focused more on academics, beer drinking and snowboarding in college (in that order), and drifted away from music.  After post-graduate stints as snowboard instructor, bartender, and snow reporter, she settled down in a corporate job (albeit at a ski resort) and starting playing bass again.  Various twists and turns, including promotions, a baby, and an MBA, brought her to a place where she could choose where she wanted to live, and she decided on midcoast Maine, because it was near the mountains and had a terrific orchestra with whom to play.

In addition to being a member of the bass pack in the MSO, Sally plays with an all-woman jazz big band.  She still snowboards, though with her 11 year-old son now, and still thinks the bass is cooler than any other instrument, though the cello will always sound prettier.