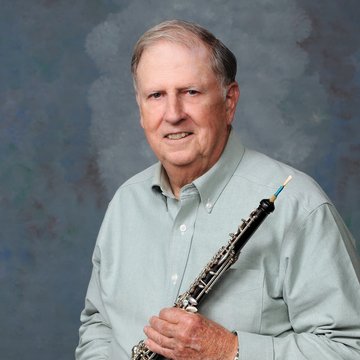 My musical life started at age six with clarinet lessons, and continued through high school and college. Then an Army tour of duty and a growing family interrupted my playing. It wasn't until age 59 that my love of music again prevailed.

After retiring from 30 years employment with a pharmaceutical company as a Medical Sciences Liaison in Cardio-Vascular Diseases, I decided to explore the oboe and was totally captivated with that instrument.  Finally having the time, I took the opportunity to study with several good oboists and was able to do extensive practicing.

In 1999, I contacted the Midcoast Chamber Orchestra. I  was accepted conditionally (the other person didn't show up!) and that has worked out to be one of my best-ever decisions.

A year after joining the [now named] Midcoast Symphony Orchestra, there was an opening on the Orchestra Board and later, for a Manager and Executive Director. I had some management experience and certainly the passion to work with this fine group. Tentatively, I took the chance - and served as Executive Director until retiring from that role at the end of the 2017-18 season.

Now mostly playing in the orchestra when there is a 3rd oboe part, I continue to serve as a member of the Board. Joining the MSO has been one my good fortunes in life. I still struggle to keep up with many of the fine musicians... but it's all a labor of love.