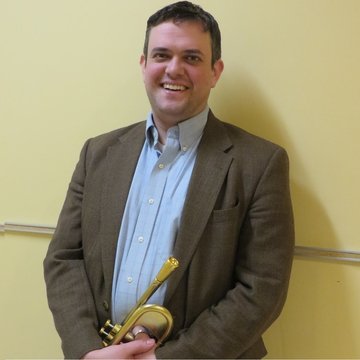 Tim grew up outside Burlington, VT and began playing trumpet at the age of 10. In high school he studied primarily with Larry Solt in Burlington and also with Charles Schlueter, former principal trumpet of the Boston Symphony Orchestra. After high school, Tim attended the prestigious Jacobs School of Music at Indiana University in Bloomington, where he pursued a degree in trumpet performance. At Indiana University, Tim studied with Edmund Cord, former principal trumpet of the Israel Philharmonic, Utah Symphony Orchestra, and Santa Fe Opera.

After four years of music school, Tim decided to pursue other interests. He completed a degree in Russian Language and Literature while working as the executive chef of a local restaurant in Bloomington. After college, Tim continued his career in the restaurant industry until he decided to radically change gears and go to law school. He graduated from the University of Maine School of Law in 2012 and has been a practicing attorney ever since.

After more than 10 years since putting down the trumpet, Tim decided it was time to pick it up again and he joined the Midcoast Symphony Orchestra in early 2015. Tim lives with his wife in Lewiston. In his spare time (spare time?), he enjoys traveling with his wife, fine wine and food, reading, and tennis—both watching and playing (poorly). He still enjoys cooking.

The second, soulfully melodic, movement showed [Tessa Lark's] ability to make the violin sing, especially in the lower registers, and in the finale she came into her own entirely, with an up-beat tempo, world-class sound projection and near perfect rapport with the orchestra, especially the woodwinds.