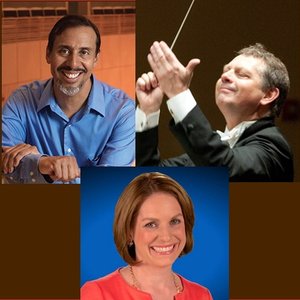 Missed it? See the video here.

Rohan Smith is in his 17th season with MSO and has led the orchestra to critical acclaim in performances of the major symphonic repertoire. He is also Director of Orchestral and Chamber Music at Phillips Exeter Academy in New Hampshire and is a professional violinist, having performed orchestral and chamber music in Europe, Australia, and the New York City area.

George Lopez has been a featured pianist across the globe as recitalist and soloist with orchestras. He has been guest soloist with MSO numerous times and is an audience favorite. He is the Beckwith Artist in Residence at Bowdoin College and conducts the Bowdoin Chamber Orchestra, in addition to being a piano instructor there.

Event host Caroline Cornish spent 18 years in broadcast journalism, including nearly 14 years as a reporter and anchor at WCSH-6 (NEWS CENTER Maine), the last four as the co-anchor of "207." She interviewed actors, musicians, sports stars, politicians and ordinary people experiencing unusual events. She left journalism in 2017 and works in communications and public affairs for Maine Medical Center.