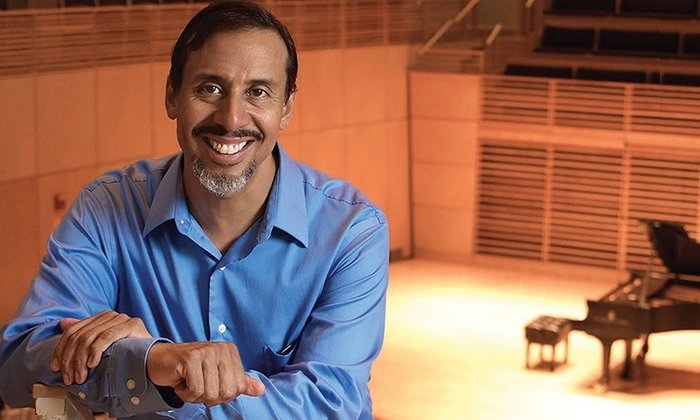 George Sebastian Lopez, pianist, has been featured across the globe as recitalist, soloist with orchestra, and collaborator. Mr. Lopez received critical acclaim for his interpretation of Bach’s Goldberg Variations at the Concertgebouw in Amsterdam and performed the complete cycle of Beethoven Piano Concertos in his last two concert seasons. He was invited by The International Holland Music Sessions, now one of the top performing arenas for up-and-coming musicians in Europe, to go on a world tour where he performed in Paris, London, Cologne, New York’s Weill Recital Hall at Carnegie Hall, and in Los Angeles where he was hailed by the Los Angeles Times for his “. . . musical perspective, continuity, and kaleidoscopic colors.” He also performed Gershwin’s Rhapsody in Blue to a capacity crowd with the New Hampshire Music Festival Orchestra. More recently, he has performed recitals in Switzerland and Italy and played Chopin’s Piano Concerto No. 1. He premiered a piano concerto written for him by Romeo Melloni, an Italian composer from Milan, which he recorded with the Czech Philharmonic Chamber Orchestra in Prague with Maestro Paul Polivnick. He toured the U.S. West Coast, performing solo and chamber music concerts as well as masterclasses in Seattle and Yakima. Mr. Lopez performed at Brown University with renowned American composer David Amram for a weeklong residency.

His chamber music collaborations have included the Emerson String Quartet, the Rainier Quartet, the Ying Quartet, the Incanto Ensemble of Germany, and the Aurea Ensemble of Providence, along with members of some of the top orchestras in the country with whom he plays regularly at the New Hampshire Music Festival. He was invited by the Montclaire String Quartet to open their concert season with Brahms Piano Quintet in F Minor at the Clay Center for the Arts in Charleston, West Virginia, where he is a frequent guest artist. Most recently, he performed a recital with cellist Emmanuel Feldman in Boston’s Jordan Hall, giving a world premiere performance of Jan Swafford’s In Time of War for cello and piano.

In addition to the New Hampshire Symphony, Mr. Lopez has appeared with the Granite State Symphony Orchestra, the Midcoast Symphony Orchestra of Maine, the Fort Smith Symphony and most recently with the Southwest Florida Symphony in Ft. Myers where he played the Grieg Piano Concerto.

Mr. Lopez has been an advocate for music education for many years and is a popular lecturer on the arts in New England. He has given lectures for the European Piano Teachers Association in Amsterdam. He has had active studios throughout New England at schools such as Phillips Exeter Academy and St. Paul’s School, having graduated several students to major conservatories in the U.S., including Juilliard Prep, Hartt College, Manhattan School of Music, Mannes College, and the University of Southern California.

Born in Brooklyn, New York, and raised in Belize to Mayan parents, George Lopez started playing the piano at the fairly late age of 11. Upon returning to the U.S., he won his first orchestral competition at 14 in Texas and two years later was awarded a full scholarship to The Hartt School of Music. After graduating with honors, he went to Paris on a Franco-American study grant and was given a unanimous First Prize for the Diplome supérieur. He completed his Masters Degree cum laude in Amsterdam. He resides in Brunswick, Maine, with his wife and kids where he is the Beckwith Artist in Residence and conducts the Bowdoin Chamber Orchestra

Click here to see a video from Bowdoin College Maine

The second, soulfully melodic, movement showed [Tessa Lark's] ability to make the violin sing, especially in the lower registers, and in the finale she came into her own entirely, with an up-beat tempo, world-class sound projection and near perfect rapport with the orchestra, especially the woodwinds.